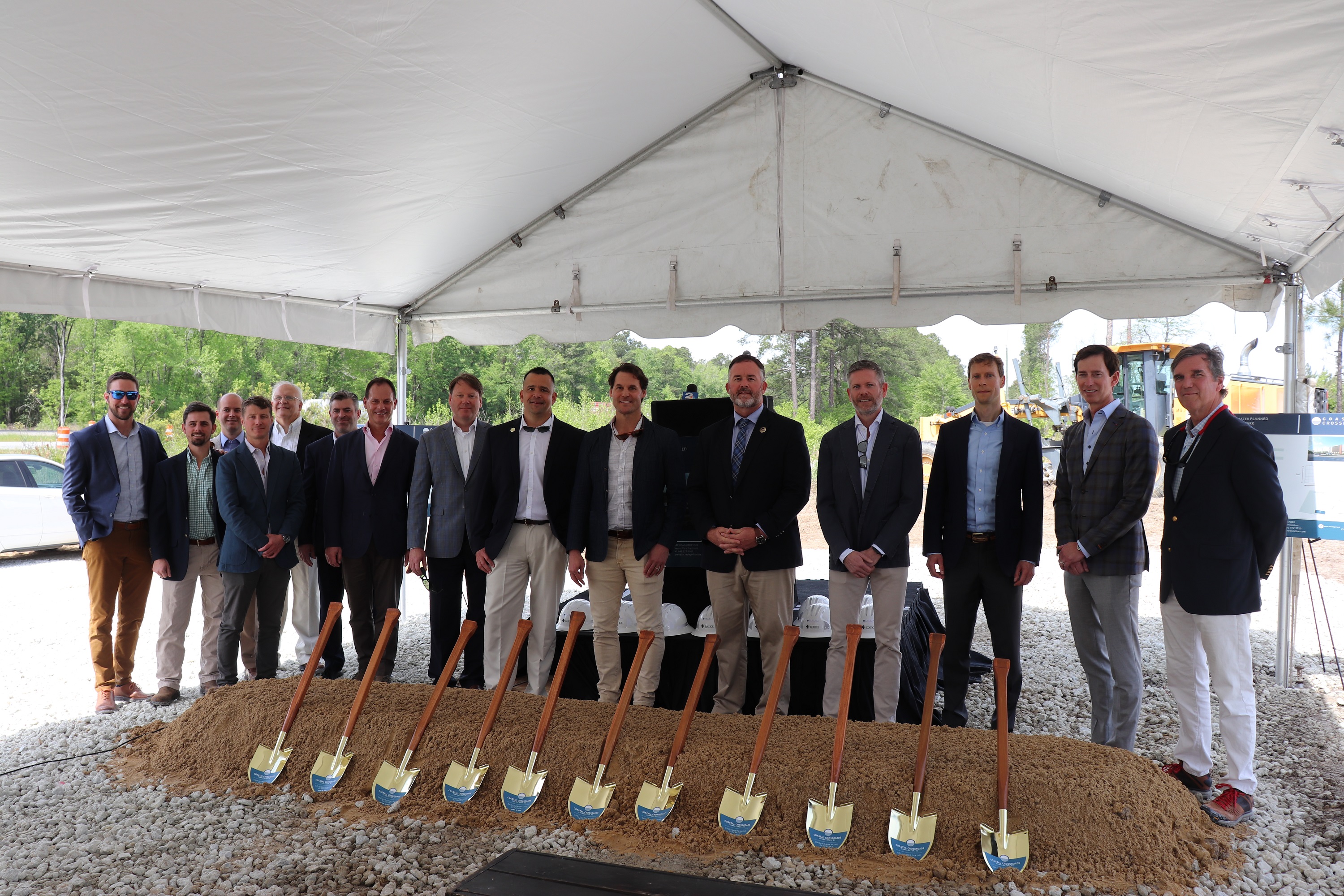 Adam Seger credits a family holiday visit during the COVID-19 lockdown with the idea to build one of the largest speculative warehouse projects in the Charleston region.

“My wife’s mother lives in West Ashley and we were visiting around Christmas in 2020 and my mother-in-law could tell I was bored,” Seger, an executive with Indianapolis-based Pure Development, said during a groundbreaking event April 13 at the construction site off Interstate 26 near Summerville.

“My mother-in-law was like, ‘Get your butt out of the house,’” Seger said. “So, I went out and just got super enthused about everything that’s going on at the port and the harbor deepening — it seemed like a macro wave that it would be smart to get in front of.”

Seger reported his findings back to the home office in the Hoosier State and was told to start making offers on available land. Pure Development ultimately teamed up with Citimark Realty, paying $8.75 million a year ago for the 131-acre site at the Jedburg exit.

The 1.1 million-square-foot Coastal Crossroads project is expected to attract a retail distributor that will move cargo from the Port of Charleston to an inland network of stores.

It’s one of just three speculative deals — meaning no tenants have been secured at the time construction starts — topping the 1 million-square-foot mark in the region. A surge in retail imports and the growing Southeast consumer market means there likely will be more in the near future.

“The interest of companies wanting to locate in Charleston and South Carolina is only expanding,” said Micah Mallace, senior vice president of marketing and sales for the S.C. State Ports Authority. Mallace said the port operator is fielding inquiries from some of the nation’s largest retailers looking for storage and distribution space.

“The pandemic really solidified the place of the giant retailers — the Walmarts, Targets and Amazons — it’s really accelerated their pace of growth,” he said. “It’s a story of the ‘bigs’ getting bigger.”

Barrineau said he’s seeing a mix of retail and manufacturing customers looking for space in the region, with the Volvo Cars plant in Ridgeville attracting attention from electric-vehicle suppliers like battery manufacturers. And they are wanting space quickly, with lead times of typically months instead of a year or two.

“We’re getting to the point where we can find out just how vibrant our market is with the big-box buildings,” Barrineau said, adding he expects a 1.5 million-square-foot warehouse eventually will test the local market’s strength.

A report by Daniel Island-based Charleston Industrial shows that 5.1 million square feet of speculative warehouse construction is in the pipeline for 2022, and 85 percent of that space is expected to find a tenant before work wraps up.

The report predates the start of construction of Coastal Crossroads and the announcement by Dallas-based Dalfen Industrial of a 1.3 million-square-foot warehouse — the area’s biggest to date — planned for Palmetto Commerce Park in North Charleston.

Interest in the Dalfen project “has been a lot more than we were hoping for and expecting, which is great,” said Kevin Caille, the Texas developer’s Southeast market manager. A single e-commerce retailer is expected to fill that space, he said.

All of that new construction is in addition to 1.9 million square feet of space that was leased during the first quarter of this year.

“Shockingly, there is no existing ‘Class A’ space over 40,000 square feet available to be leased and occupied today anywhere in Charleston,” said Mike White, broker in charge for Charleston Industrial. “Warehouse users will have to commit now but wait until (at least) the third quarter of 2022 to occupy their new warehouse space.”

Imported consumer goods continue to break records at the port, which moved 263,344 20-foot-long containers through its terminals in March — the most in a single month and topping the previous high hit in November. Mallace, the maritime agency’s marketing chief, said the flood of imports means more warehouse space is needed.

“We have to be able to continue to develop more,” he said. “If we don’t want to run out of toilet paper and we want to continue buying gym equipment for the home — which we’ve learned we’re not going to use — we have to have available buildings to do so.”